Posted by the notorious Tavis Ormandy.

We’ve talked before about how we use Google scale to amplify our fuzzing efforts. I’ve recently been working on applying some of these techniques to Antivirus, a vast and highly privileged attack surface.

Among the products I’m working on is Kaspersky Antivirus, and I’m currently triaging and analyzing the first round of vulnerabilities I’ve collected. As well as fuzzing, I’ve been auditing and reviewing the design, resulting in identifying multiple major flaws that Kaspersky are actively working on resolving. These issues affect everything from network intrusion detection, ssl interception and file scanning to browser integration and local privilege escalation.

Many of the reports I’ve filed are still unfixed, but Kaspersky has made enough progress that I can talk about some of the issues. One notable observation from this work was that some of the most critical vulnerabilities I’ve been submitting were simply too easy to exploit, and I’m happy to report that Kaspersky are rolling out some improved mitigations to resolve that.

Some of the bugs Kaspersky has already resolved include vulnerabilities parsing everything from Android DEX files and Microsoft CHM documents to unpacking UPX and Yoda’s Protector. We’ve sent dozens of reports to Kaspersky to investigate, any of which could result in a complete compromise of any Kaspersky Antivirus user.

Let’s examine one of the issues in more detail. For this first issue, if the release date of the definitions in Kaspersky Antivirus (or any other products using the Kaspersky engine, such as ZoneAlarm) is after 7-Sep-2015, then the vulnerability described below is already resolved.

Thinstall containers are virtualization wrappers around applications to simplify distribution. The product was acquired by VMware in 2008 and renamed VMware ThinApp. Kaspersky attempts to unpack thinstall version 4 containers to scan the contents when it encounters one. Thinstall applications can be recognised by the magic constants at their entry point.


Fuzzing thinstall applications revealed a stack buffer overflow extracting the container contents. Because Kaspersky did not enable /GS, it is possible to overwrite the stack frame and redirect execution quite simply. Support for /GS was first introduced in Visual Studio 2002, and has been enabled by default for many years. It is possible to disable /GS in your build configuration, but it would be an exceptionally bad idea to do so.

By extracting the container record responsible for the overflow, it didn’t take long to reliably gain control of the instruction pointer.

Kaspersky have enabled /DYNAMICBASE for all of their modules which should make exploitation unreliable. Unfortunately, a few implementation flaws prevented it from working properly. Multiple PAGE_EXECUTE_READWRITE mappings are created at predictable locations for dynamic code using VirtualAlloc().

I dumped the contents of the pages using .writemem, and quickly found a stub for calling kernel32!LoadLibraryA.

This would be a useful primitive for exploitation if we could control the parameters, but there is no way to know where any useful strings are located. I guessed that the filename that’s being scanned must be somewhere on the stack. After dumping the stack with dda I found it at [esp+0x8f*4].

Note that the filename or extension being scanned doesn’t matter, I used .txt.

If I could get the exploit to look like a valid DLL, I could return into LoadLibrary and get it to invoke DllMain(). This code would then be loaded into the address space of avp.exe and execute with NT AUTHORITY\SYSTEM privileges.

I built a simple chain to clear the stack and return into LoadLibraryA, and it worked beautifully.

Unfortunately the Windows loader is very strict about the format of DLL’s, and I was unable to get it to accept the exploit and still trigger the vulnerability in Kaspersky. This might be possible given more time, but I came up with an alternative strategy instead.

I had already noticed that Kaspersky will scan archives appended to other files.

So in this case, Kaspersky would spot that a ZIP archive had been appended to a office document, and extract and scan the contents. I wondered if it was possible to put my exploit in a ZIP file, and then append it to a DLL, like this:


This would mean Kaspersky would see the ZIP file appended to the DLL and then scan my exploit, but Windows would see a valid DLL. Note that filenames and extensions don’t matter here, it is perfectly legal to LoadLibrary(“anything.txt”).

I was able to trigger the exploit this way, but unfortunately the filename on the stack was now written differently! When scanning inside an archive Kaspersky renders the filename like this: 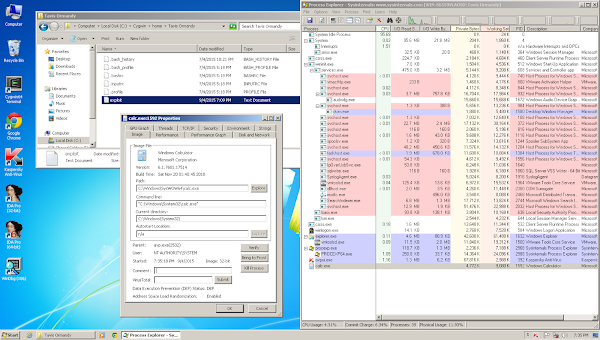 I verified the exploit worked on version 15 and 16 of Kaspersky Antivirus on Windows 7. Note that the calculator is displayed on the Service Desktop, so you will need to use Process Explorer to verify it was created.

I’ve also reported some major design flaws in various other components of Kaspersky Antivirus and Kaspersky Internet Security. The patches for the remote network attacks I had planned to discuss here were delayed, and so I’ll talk about them in a second post on this topic once the fixes are live.

We have strong evidence that an active black market trade in antivirus exploits exists. Research shows that it’s an easily accessible attack surface that dramatically increases exposure to targeted attacks.

For this reason, the vendors of security products have a responsibility to uphold the highest secure development standards possible to minimise the potential for harm caused by their software.

Ignoring the question of efficacy, attempting to reduce one’s exposure to opportunistic malware should not result in an increased exposure to targeted attacks.

In future, we would like to see antivirus unpackers, emulators and parsers sandboxed, not run with SYSTEM privileges. The chromium sandbox is open source and used in multiple major products. Don’t wait for the network worm that targets your product, or for targeted attacks against your users, add sandboxing to your development roadmap today.

I’ve previously written about Sophos and ESET, but plan to research other vendors soon.

Thanks to Kaspersky for record breaking response times when handling this report, they’ve set a high bar to beat for other vendors! More Kaspersky issues, including multiple remote code execution vulnerabilities, should be fixed and visible in our issue tracker over the next few weeks.
taviso at 10:22 AM
Share